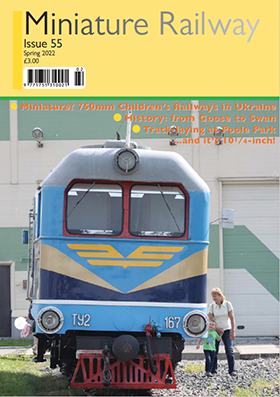 Children’s Railways in Ukraine
One of those things we all take for granted, perhaps assuming they’ve all closed, but the Soviet-era children’s instructional railways mostly survived into the modern era, some as heritage lines, and others – principally in Russia and Ukraine – for their original purpose of teaching young railwaymen and women their craft. We look in detail at Kiev in Ukraine, and give an overview of all the others after six months of war.

Poole Park
the 10.25″ railway at Poole Park ran for nearly 70 years before it was closed down by the Health & Safety Police. It was expected to return at a ‘more stable’ 12.25″ gauge, but it has been completely rebuilt at the orginal 10.25″, and after three years of local authority mismanagement, the line is about to reopen.

More Details
Miniature Railway is a 52-page A5 magazine. Launched in 2006, the magazine was originally published three times a year. There are now four issues a year, and they sell around the world. The magazine aims to cover all ride-on miniature railways, from 5-inch gauge to 15-inch gauge, plus what might be termed ‘light narrow gauge’ as well.