Our Greenspeed X4 is a 12-hour World Record Holder! 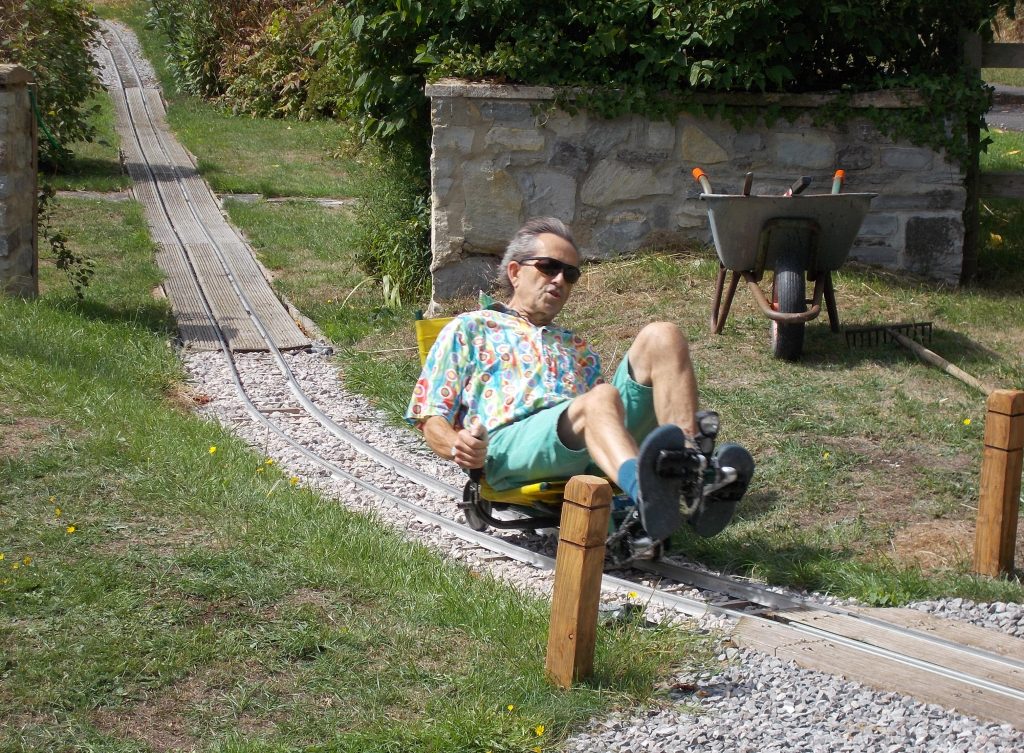 For more on the Isle Abbotts Railway, see MR34
For the full record-breaking story, see the forthcoming MR43 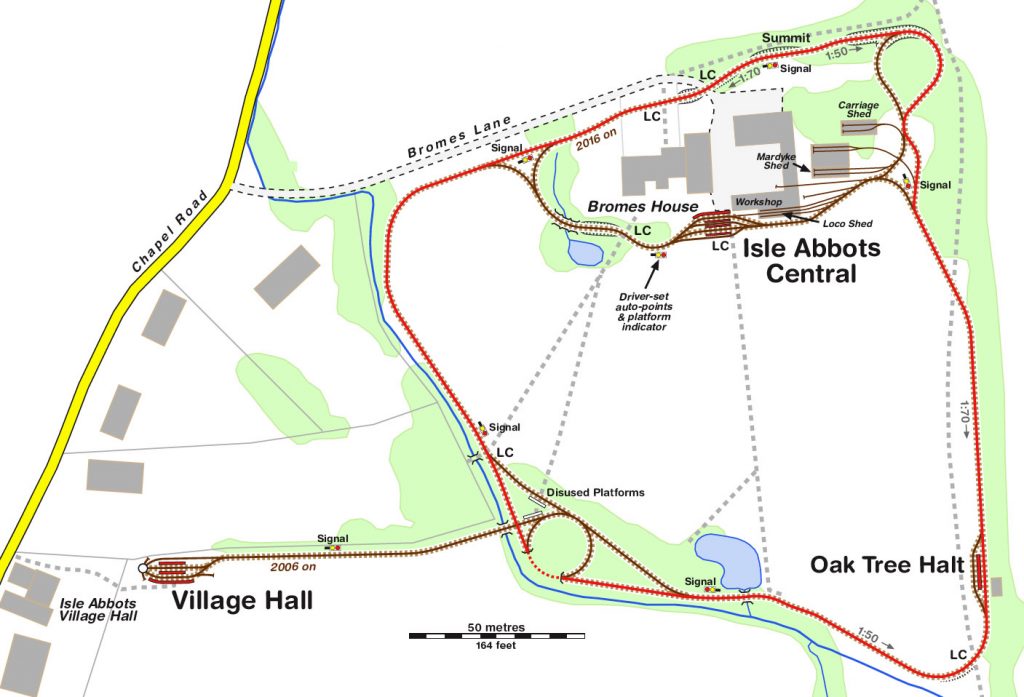 The Isle Abbotts Railway, with the 12-hour circuit marked in red. The X4 ran clockwise, with timing and lap-counting at the Bromes Lane crossing

In what appears to be a world first, David Henshaw of ‘Miniature Railway’ magazine, and ten-year-old son Orlando have set a human-powered endurance record for a miniature locomotive. The 12-hour marathon took place between 08.20 and 20.20 on Sunday 19th August 2018 at the 7 1/4-inch gauge Isle Abbotts Railway near Taunton in Somerset, UK. Riding our Greenspeed X4 recumbent in shifts of ten to 40 minutes, we completed 325.7 circuits of the railway, a total distance of 117.4 miles at an average of 9.78mph.
There is no existing human-powered miniature railway record, but in early December 2017, a 24-hour record was set by Andries Keyser and a club team from the Pietmaritzburg Model Engineering Society in South Africa, using steam locomotive ‘Doreen’ This record of 206 miles and 8.6mph has been ratified by Guinness World Records, although a team in the USA claims slightly faster records of 208 miles (8.7mph) for an internal combustion machine, and 218 miles (9.1mph) for a battery-electric machine, although neither has been ratified by Guinness. 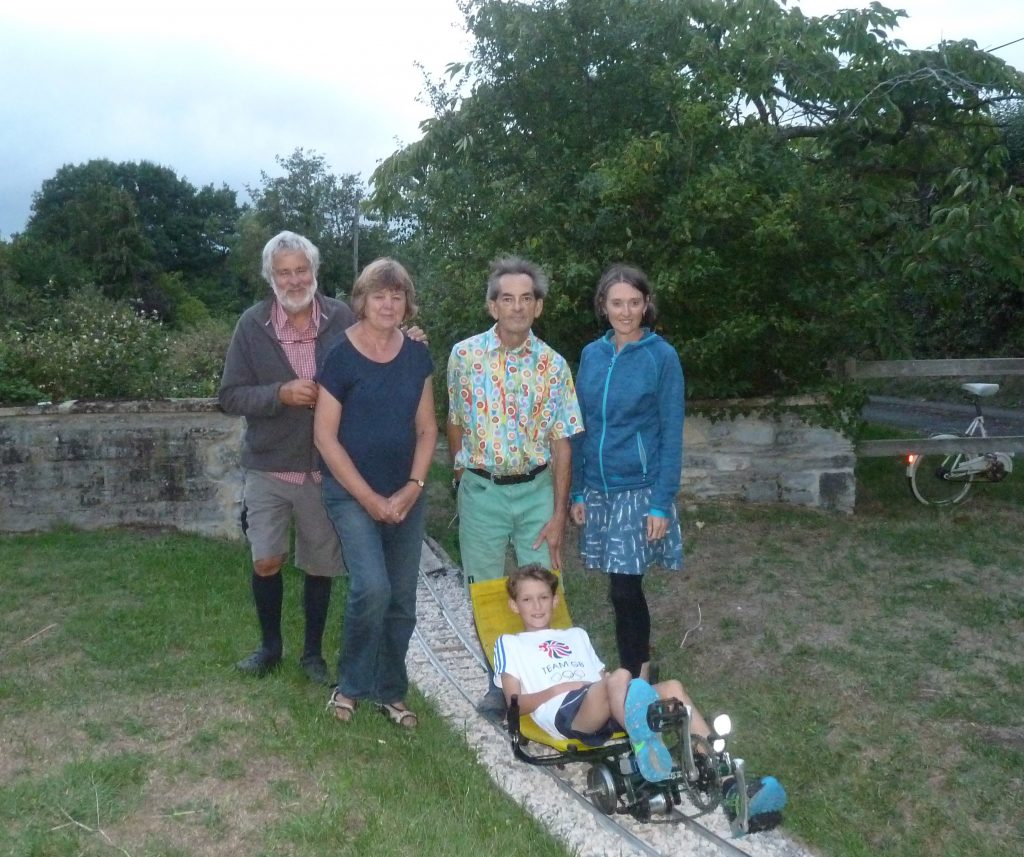 A NEW 12-HOUR RECORD
Our British 12-hour record remains unofficial, but our average speed was higher than the longer US and South African records. “We have learnt a lot in this 12-hour trial,” said David Henshaw. “And we’re quite confident that we can break the world 24-hour records with a team of three.We’re looking forward to coming back to Isle Abbotts to make another attempt. The track here has some tight curves and facing points, but it’s one of the best 7 1/4-inch lines in the country.”

MORE INFORMATION:
Greenspeed build recumbent trikes in Victoria, Australia. The road-going trikes sell all over the world, but the X4 is one of only two rail-machines built to date. See www.greenspeed-trikes.com 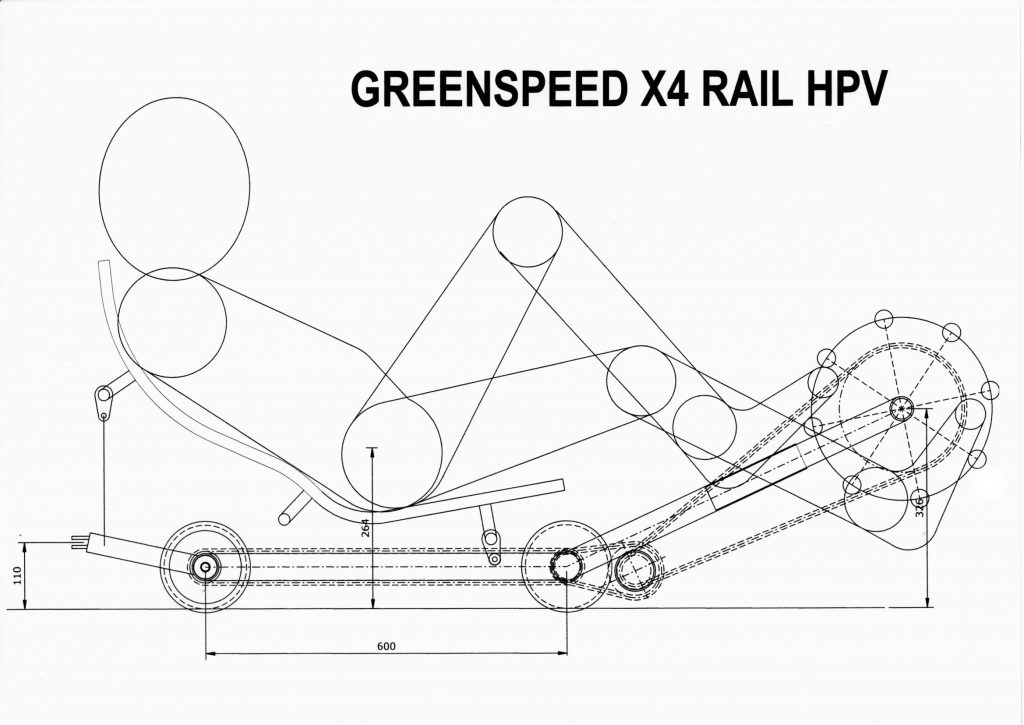 Engineering diagram of the Greenspeed X4 recumbent. With a seat just 6-inches clear of the ground, it is impressively stable, even on 5- or 7.25-inch track

The Greenspeed X4 has six forward gears and two reverse, with top gear set for a maximum of about 12mph to suit the Isle Abbotts circuit. The low recumbent position is essential on a gauge as narrow as 7 1/4 inches, where a conventional bicycle would not be practical.

The Isle Abbotts Railway is situated in the village of Isle Abbotts ten miles east of Taunton in Somerset. The line includes about a mile of track altogether, including a branch to the village hall! The record breaking run was set on the 0.36 mile main circuit. The private line is run by Martin Rickitt and his wife Barbara. See http://www.isle-abbotts.org.uk/aboutia/railway/railway.html