UPLOADED August 2022. We had bought some carriages from the private North Cornwall Miniature Railway back in early 2019, and believe it or not, what with Covid, and David’s broken arm, followed by his rather nasty aortic dissection (a sort of heart issue), it was not until July 2022 that we got down to Launceston with a team of three, an extra-large Transit van and (thank goodness) all the equipment needed to record what we saw. The full story can be found in Miniature Railway 56, out around the end of August 2022. See the home page for details. Meanwhile here’s a quick trip round the railway hauled by one of two(!) Mardyke Hymeks

UPLOADED August 2018. We’ve wanted to tackle the Guinness World Record for miniature locomotives, and we knew our Greenspeed X4 recumbent was capable of doing it. In the event, we had to scale back our August 2018 attempt through lack of time-keepers and other essential volunteers, but with only two riders (doing 20 to 30 minute shifts) and three time-keepers, we succeeded in establishing an unofficial 12-hour record at a speed high enough to beat the existing steam, petrol and electrically-powered 24 hour records.


UPLOADED August 2017. First up, a bit of history. Sadly, we didn’t produce many videos on my father’s railway at Packers Hill. This mobile phone footage shows the last train in August 2014. Luckily, the rolling stock was all saved, and everything is now at Manor Road. 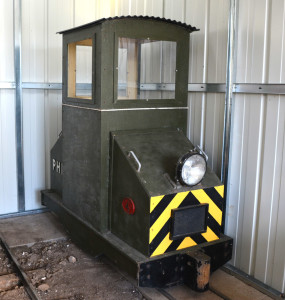 UPLOADED November 2016. Alexander’s locomotive ‘Patrick’ is now complete, and has run for about ten miles. This included several laps of the miniature railway at Moors Valley near Bournemouth. Patrick is variable gauge from 7 1/4″ to 10 1/4″ and has a small diesel engine and electric/mechanical transmission. This gives three gears in each direction. The main generator works as a motor to give an electric start. Full story in MR36