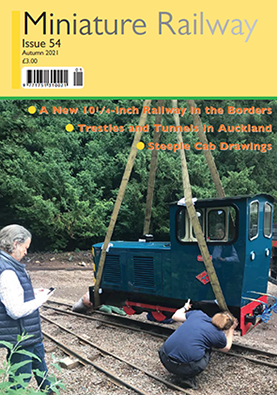 Trestles & Tunnels In Auckland
A fascinating club line down-under. It started life as a 3.5/5″ raised oval of track, and it’s now surface level and triple gauge: 3.5″, 5″ and 7.25″. Includes some entertaining tunnels, the longest trestle bridge you’ll see for a while and a huge variety of locomotives.

Ayton Castle
At a time when 10.25″ railways are closing at quite a rate, it’s good to see a new railway going into this wild corner of the Borders Region. It’s already faced some major storms and that virus pandemic.

Patrick Henshaw’s Steeple Cab loco
Dating from the 1980s, this was a cracking little machine. It still is, because we have it here in our collection. Including drawings and other information to build your own

The Rode Woodland Railway
A bird park in the West Country that included one of the best little 7.25″ railways around. One of Frome’s best-kept secrets which sadly closed just months after these photos were taken

More Details
Miniature Railway is a 52-page A5 magazine. Launched in 2006, the magazine was originally published three times a year. There are now four issues a year, and they sell around the world. The magazine aims to cover all ride-on miniature railways, from 5-inch gauge to 15-inch gauge, plus what might be termed ‘light narrow gauge’ as well.