Once again, we venture far and wide in search of the fascinating, and the frankly unlikely. But it’s all real, from little known 12-inch gauge railways in Australia to the equally unknown Ise Valley near Kettering – a beautifully crafted 71/4-inch gauge freight railway, which has now closed 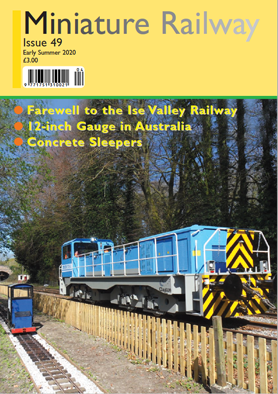 Ise Valley Farewell
The 12-inch Gauge in Australia
Concrete Sleepers in Germany
Get Everything in Writing!

The 12-inch Gauge in Australia

Australia came rather late to miniature railways, and when they did begin to appear at travelling fares and amusement parks in the 1920s, the showmen mostly adopted 12-inch gauge because it’s all there was! By the 1960s the travelling railways were closing down, but much of the equipment has been saved, and the early steam locomotives are now being purchased and restored by enthusiasts. This movement has helped encourage the creation of bold new railways, which are being planned in many places. A fascinating story.

Farewell to the Ise Valley

Just prior to lock-down, we visited the Ise Valley 7.25″ garden freight railway near Kettering. Owner Francis Terry had created one of the best lines of its kind, and we took the opportunity to record its passing.

Concrete is a great material for sleepers. All the help you need to get going, including possible loan or purchase of moulds…

Get Everything in Writing!

A woeful tale from Stuart Madgin on why you MUST get a watertight lease if setting up a railway. He has been evicted three times…

8.4MB PDF
Our pdf digital issues are viewable on most digital media, and can be kept to create your own digital library.