New for July 2020! Hot of the press, and long overdue, the story of the Ruislip Lido Railway 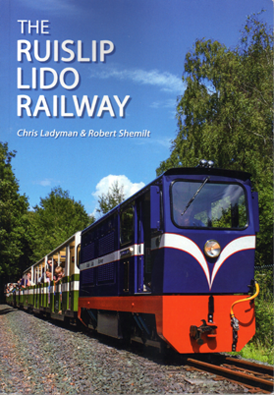 ‘The Ruislip Lido Railway’ is written by Chris Ladyman and Robert Shemilt. Hot off the press in July 2020! A 300-page illustrated history of the line, covering every aspect of this unusual 12-inch (or is it 12.25-inch?) miniature railway in north London. From the earliest days to today’s well-established and professionally-run railway. Includes lots of new photographs of the railway’s iconic locomotives.

Ruislip Lido – the last surviving 12-inch miniature railway – was originally built in the form of a 1,000 yard circuit based around Woody Bay station on the quieter north-east side of the Ruislip Lido in north London. If the place sounds like a bathing pool, that’s only partially true, because it’s actually a reservoir built in 1811 to supply the nearby Grand Junction Canal and transport water to London. It became a popular spot for visitors, and enhancements gradually began to appear, including the Lido Health Spa in 1936, an artificial beach, and the railway in 1945.

The railway led a quiet life until a serious derailment in 1978, which resulted in closure. But the council invested in safety improvements and put out a call for volunteers to run the line, resulting in the formation of the Ruislip Lido Railway Society, which took over in 1980. The Society has extended the railway by eliminating the return loop and extending the double track north, then west around the Lido, where it reduces to a single line, through a passing loop at Haste Hill station, then back to single track to the big new terminus at Willow Lawn, near the Lido entrance. The total track length is almost 2 1/2 miles, claimed as the longest 12-inch line in the country. Surely the Fairbourne in Wales is longer? It is, but cheekily Ruislip is talking about 12-inch gauge, although gauge widening on curves certainly takes it into 12 1/4-inch territory in places. Most stock is thought to be transferable between the Lido and other nominally 12 1/4-inch railways, and attempts are finally being made to establish common standards.

Published by the Ruislip Lido Railway Society, with profits assisting the railway in these difficult times.